The math department at Rutgers hosts weekly experimental mathematics seminars dedicated to results or techniques which have some “experimental” flair. A few months ago, OEIS-founder Neil Sloane showed me a fascinating sequence (A326344) before the seminar:

This sequence is generated by the following rule:

This strange sequence has a surprising property, which we can observe by looking at its graph: 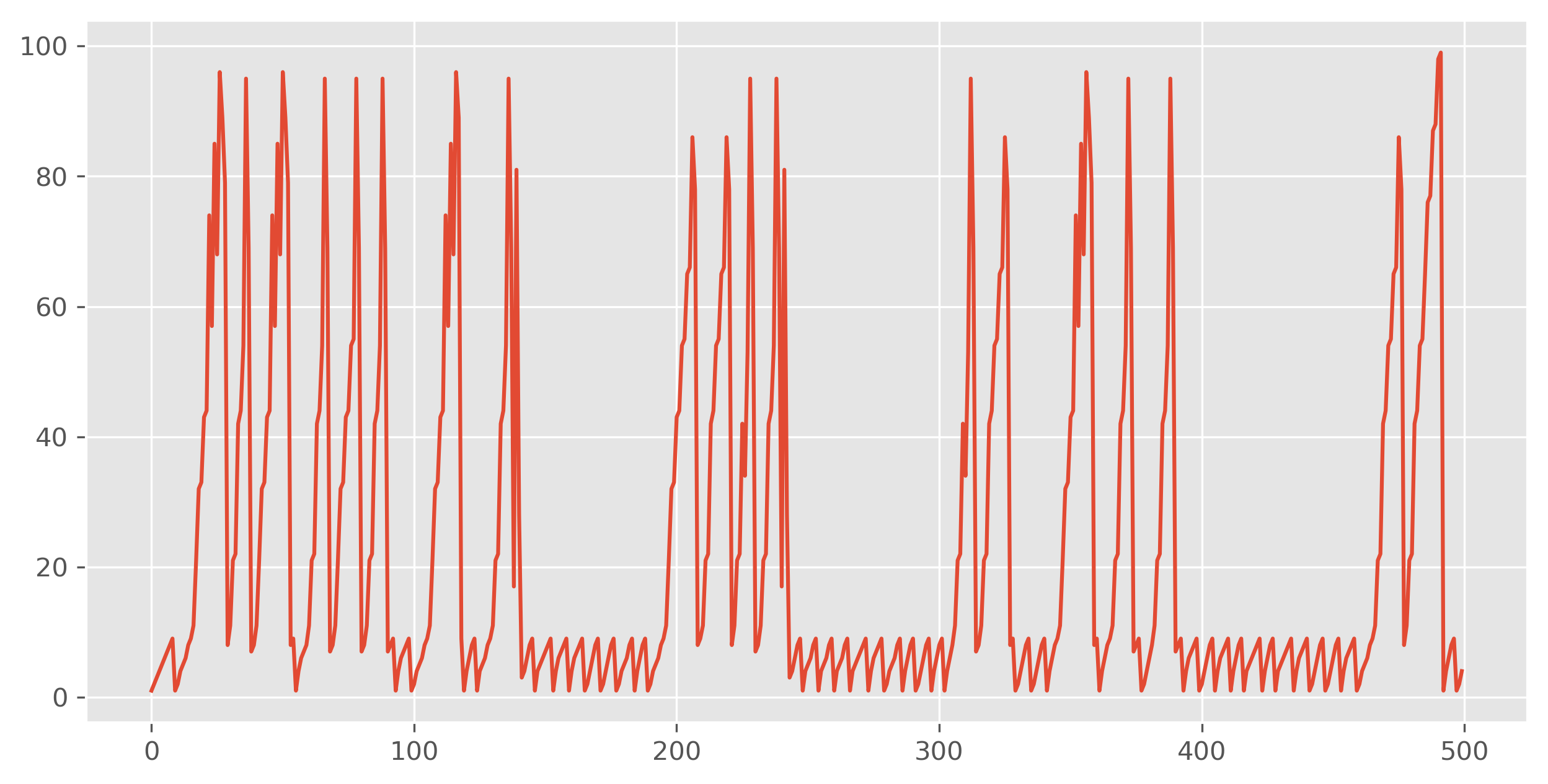 This is spooky. Why should the sequence be bounded at all? Why 909? How can you prove anything about such a weird sequence? This is what we’ll talk about here.

First, before continuing, I have code to play with this sequence:

When our sequence was first submitted, Michel Marcus reported that 909 was the maximum value up to $10^8$ terms. This is hard to prove because the sequence is highly irregular. Sometimes you apply the composite rule; sometimes you apply the prime rule. An induction argument has very little power in its inductive hypothesis because it can’t discern which rule should apply, or what rule was last applied. The picture looks something like this:

We need to reduce the number of possible branches to make sense of anything here. One way to do this is with a “modulus” argument. Essentially, it is easier to think about our sequence in blocks of residue classes with some nice modulus, like 2, 6, or 30. This way, you know which terms in the block are definitely composite, which are possibly prime, and so on.

For example, suppose that we try to prove something about our sequence by inducting on blocks of two consecutive terms. One of these terms has even index, so the composite rule applies. The other has odd index, so potentially either rule applies. There is still some branching, but now half as much: 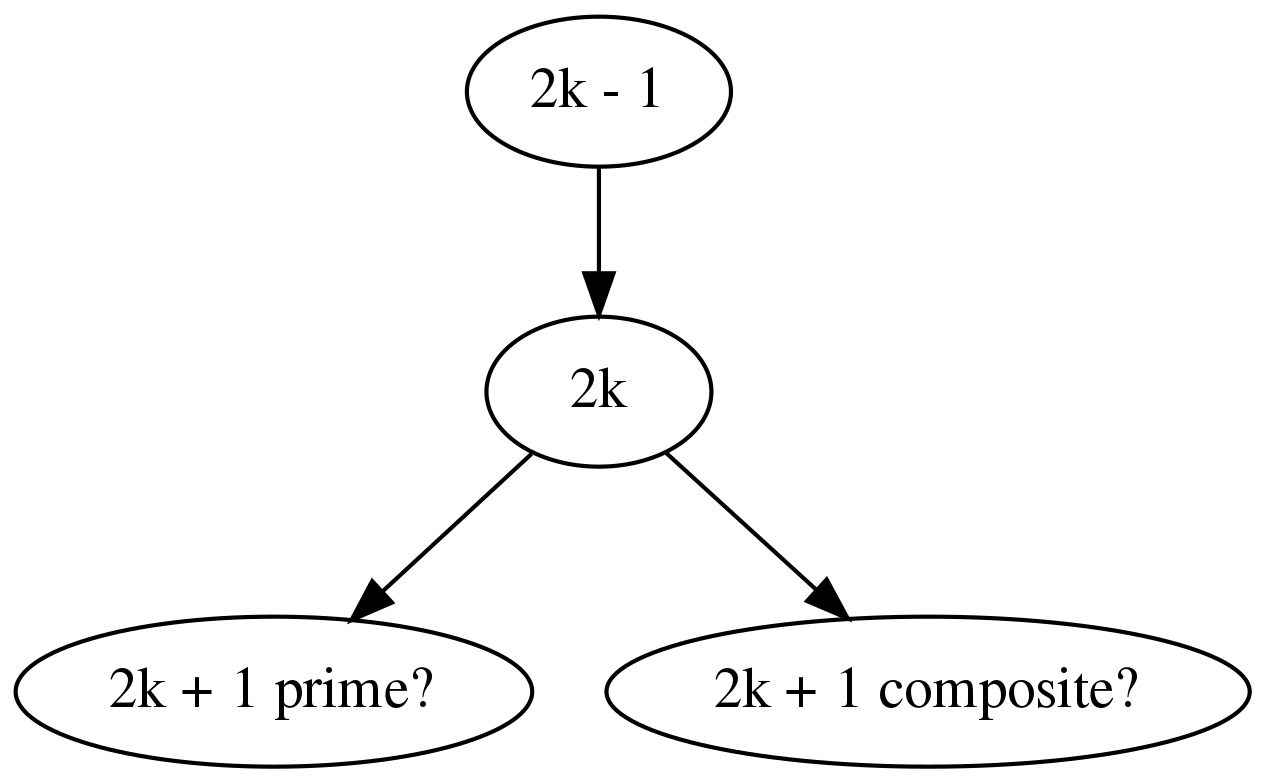 This is the modulus argument where we use 2 as our modulus. If we chose a different modulus, say 6, then we can cut down on the branching even further: 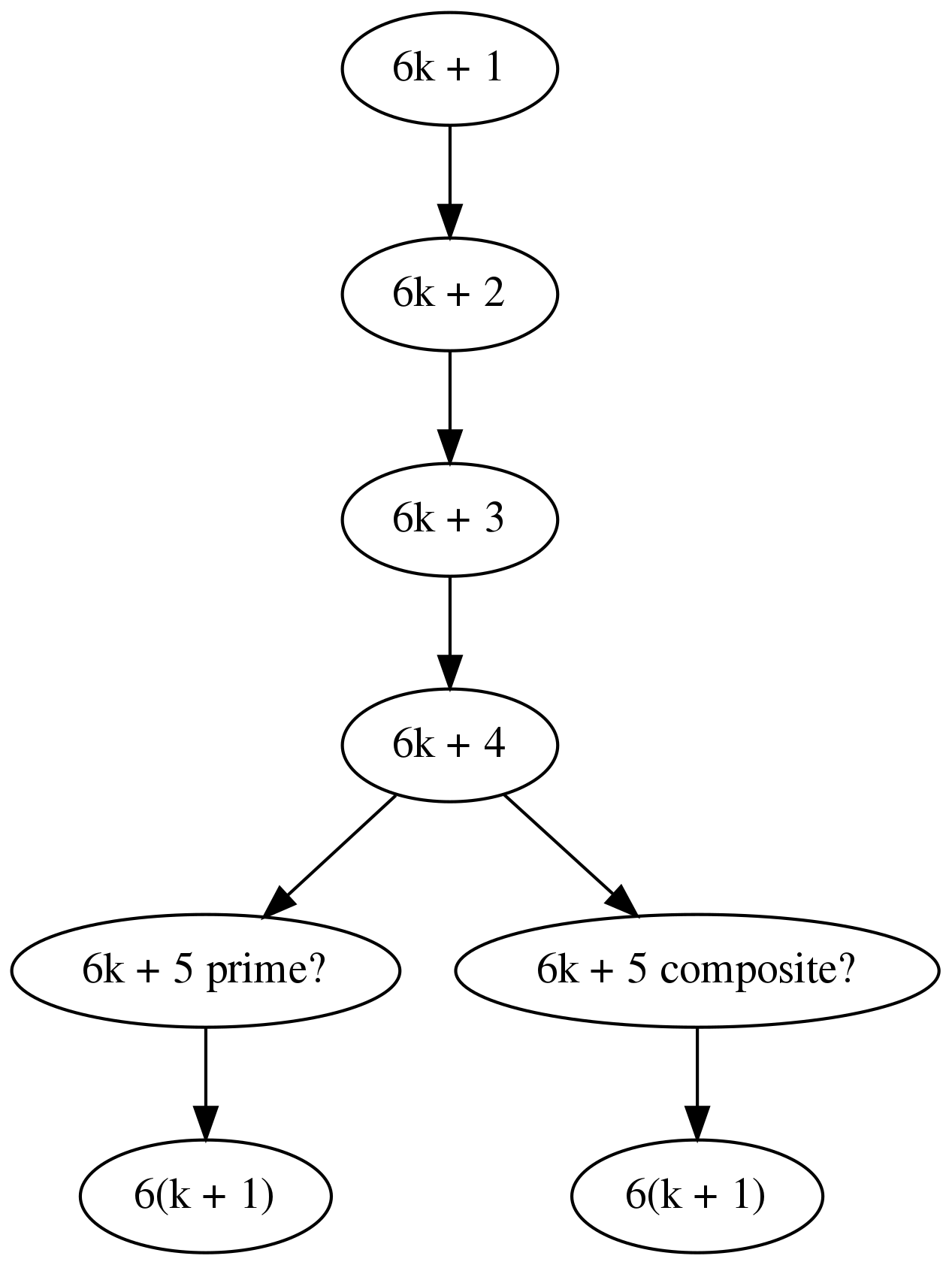 “Larger” moduli will rule out more residue classes as composite1. We can use this idea to construct computational proofs that our sequence is bounded.

In fact, the argument proceeds almost exactly how I’ve drawn it here. We will construct a tree which contains all possible values of our sequence (possibly more than needed). The nodes of our tree will be labeled with $(r, x)$ pairs, where $r$ is the residue class in our modulus and $x$ is the possible value of the sequence.

If this process terminates, then you have constructed a tree which (with the first $m$ terms) contains all possible values of the sequence $a(n)$. The maximum value of $x$ for all pairs $(r, x)$ will be an upper bound of $a(n)$.

Code to produce this tree looks something like this:

These arguments have little to do with our sequence itself. The same idea would apply to any sequence which depends on a rule that can be affected by knowing the residue class of an index.

Rémy Sigrist gave the first proof of any bound, essentially using the modulus argument with 2.

Sigrist’s argument is computational: Create a set EVEN for the values of $a(n)$ which occur at even values of $n$. If, say, $a(2n)$ is an element of EVEN, then there are two possible “next” values for $a(2n + 1)$, corresponding to the two different rules we could apply from our sequence. After we know those two values, the next possible $a(2n + 2)$ can be computed using the composite rule.

Every value of $a(2n + 1)$ is the result of applying one of $p$ or $c$ to an even value, so the corresponding set ODD is contained in the image of EVEN under $p$ and $c$. If our process terminates, then we have a finite set which contains the image of $a(n)$, which gives us some upper bound. This upper bound may be larger than strictly necessary, but it would be better than nothing.

Here is a short function to automate and illustrate this argument:

This method is essentially identical to the general modulus argument with 2 as the modulus. It avoids explicitly mentioning the tree by keeping values in the EVEN and ODD sets.

Andrew Weimholt obtained the correct bound of 909 by using a modified form of the modulus argument with modulus 6. His modification consists of starting the trees from values where $a(n)$ could “escape” single digits, then terminating a branch if it ever returns to single digits. His algorithm is therefore something like this:

If the trees constructed in step 2 are finite, then all values of $a(n)$ which are greater than 9 must exist in them. Computing the maximum elements in each tree will give us another upper bound for $a(n)$.

Here is an example of two such trees, produced by Weimholt himself3:

This ends the story of A326344, but there is certainly more.

The obvious question about $a_b(n)$ is whether it is bounded for all $b$. answer, so far, is probably. The modulus argument, when automated, seems to always succeed in tightly bounding $a_b(n)$ from above. The known maxima are given in A327701. However, we do not know if all of these sequences are bounded. I have some wonderful data to suggest that they are:

It seems like $a_b(n)$ is bounded almost perfectly by $b^3$. Thus far, I’ve had little success proving this. The modulus argument seems to always work, but it really depends on the particulars of each base. That is, it seems like each $a_b(n)$ gets “lucky” in how it remains bounded by $b^3$. It is mysterious why the modulus argument should always work. It is also mysterious why $b^3$ is the important quantity. Why not $b^2$? Or $b$? Or $b^{3 / 2}$?

For the time being, nearly everything about these sequences remains open.

Here are a few conjectures about our family of sequences that would be nice to prove:

You May Also Enjoy