The past year has been strange for sports at all levels. Shortened seasons, cancelled games, and a surplus of “Out (COVID)” on injury reports. It felt like everyone, from the NBA to your local rec league, just barely got through their seasons.

You know who didn’t just barely get through their season? The Oglethorpe Stormy Petrels Women’s Volleyball team.

I went to my first Oglethorpe women’s volleyball game on September 2, 2017. The Petrel’s took on Illinois Tech in the second game of the 2017 Stormy Petrel Challenge. Matches are like tennis: Best of 5 sets. The Petrels fell to an early 0-2 deficit, and the third set seemed lost when they found themselves down 17-22. Their star player Jacoby Sims scored three quick kills to force an Illinois timeout at 20-22, and the Petrels rallied to a 26-24 victory. They won the next two sets by 5 and 3 points, respectively, completing the 3-2 comeback. I was amazed. The game was fast, explosive, and tense. I couldn’t wait to see the rest of the season.

For the rest of the season, after the Illinois Tech game, the Petrels went on a 13 game losing streak. They ended the season 4-21 overall, and 2-12 in conference play, dead last.

You see, the Stormy Petrels are a terrible women’s volleyball team. I mean atrocious. They have not had a winning season in the past ten years. In those ten years, they have gone 16-127 in conference play, and never won more than 3 conference games in a single season. Whether we bring in new coaches, new players, or new staff, it’s always the same. The Petrels are the bottom of the barrel of the Southern Athletic Association, and they have been for a long time.

And yet, I can’t quit them. Even though they’re awful, even though no one goes to the games, and even though I don’t live in Georgia anymore, I remember that thrilling first game I saw. I still hold out hope that maybe this is the year they turn it around.

Finally, this year came to pass, and the Stormy Petrels were not a complete joke.

In a shortened, conference-only season, second-year coach Anna Braun led the Stormy Petrels to a 6-5 finish. You may look at that and say, “Robert, that’s only 55%. It took a shortened season, a COVID-depleted conference, and over ten years to barely win half of their games?” And while, yes, you would be correct, this is the Petrel’s best percentage, first winning season, and best conference ranking since joining the SAA over a decade ago. For Oglethorpe, 6-5 is as good as winning the title.

To explain how amazing this is, I want to provide some context. First we need to take a detour into the world of analytics.

Elo is a numerical system used to rate the strength of teams. Arpad Elo first introduced it to rank the strength of chess players, but it is easily adaptable to any head-to-head competition. Here’s how it works.

You get a higher Elo score by winning games, and a lower score by losing games. How much your score changes depends on the following ideas:

The “base change” is 40 Elo points. That’s the most you could increase or decrease after a game. You get a proportion of that that depends on your odds of winning or losing the game. If you win, then you get 40 times the probability that you would lose. If you lose, then you lose 40 times the probability that you would win. For the other side, Elo is a zero-sum game: The loser’s score goes down the exact amount the winner’s goes up.

With this description of Elo out of the way, let’s see the history of the SAA in a graph. 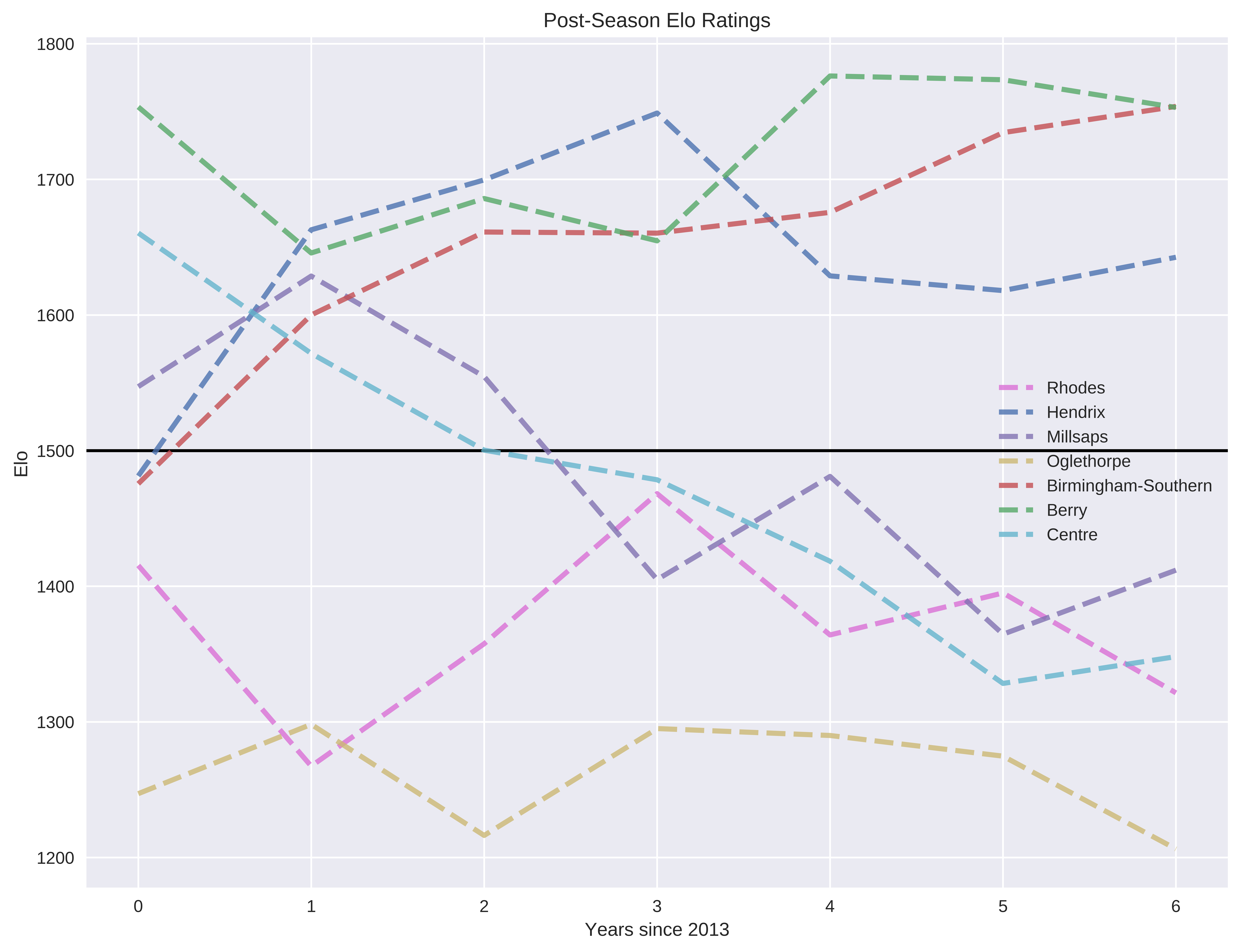 Using data compiled from the 2012-2013 season to the 2019-2020 season, I computed the Elo scores of every women’s volleyball team in the SAA and plotted them above. (I left out one team, Sewanee, because they didn’t play in the 2020-2021 season.) The graph shows a clear divide into three groups:

Now that we have some context for how bad the Stormy Petrels are, 6-5 doesn’t sound so bad, does it? How does Oglethorpe’s Elo look after this miraculous winning season? 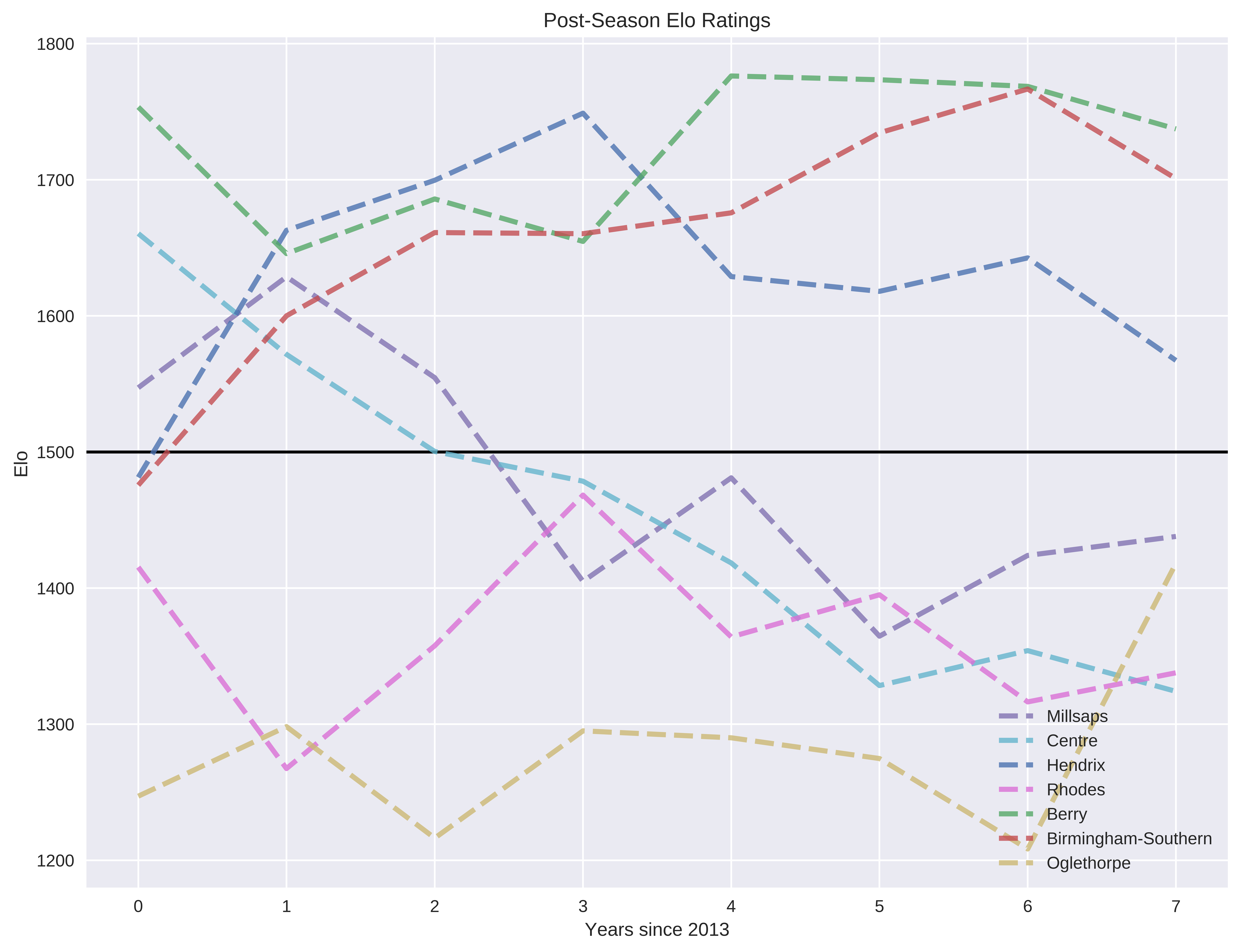 Oglethorpe’s Elo skyrocketed after this barely-winning year. The wins came from Centre (x2), Hendrix, Rhodes, and Millsaps (x2). The losses came from Birmingham-Southern (x3), Rhodes, and Hendrix. Except for Rhodes, which nearly cancels out, the losses were to teams so overpowered that they barely lowered Oglethorpe’s rating. The wins, since Oglethorpe had such a meagre rating, produced much more.

A postseason shocker: simulating with Elo

The real shocker is that 6-4 was enough to put the Stormy Petrels into the SAA playoffs with their first top-4 finish ever. We can quantify how surprising this was by simulating the 2020-2021 season.

Once we know the Elo score of two teams, we can simulate a matchup between them by flipping a biased coin. If Elo says the stronger team has a 75% chance to win, then we flip a coin that comes up heads 75% of the time, and tails 25% of the time. If we see heads, then the stronger team “won,” and otherwise they “lost.” Proceeding in this way, we can simulate an entire season of games as long as we know the Elo scores of the teams involved to a sufficiently high accuracy.

I simulated the 2020-2021 season 10,000 times and figured out how likely it was that each team made the playoffs. Oglethorpe had around a 20% chance, which is probably their best chance at finishing top-4 in a long time. The three top-dogs (Berry, Birmingham-Southern, Hendrix) all made the playoffs, so Oglethorpe had to leap over the middle-of-the-pack teams (Centre, Rhodes, Millsaps) to get fourth place.

What’s next for the Stormy Petrels?

Hot off their highest finish in a decade, where do the Stormy Petrels go? Will the new coach lead us to glory? Will she crash and burn how all the rest have? We don’t know for sure, but all the machinery I’ve laid out here will enable us to make predictions about the next season. As soon as the schedule is released I’ll be churning those out.

My mind tells me that the likeliest outcome is for Oglethorpe to have a terrible year, like we always do. My heart tells me that we’re going to win it all, baby.